The treacherous nighttime icy Arctic sea rescue of two hunters by a Canadian Forces search and rescue (SAR) team has been selected as the winner of the 2012 Cormorant Trophy for Helicopter Rescue by AgustaWestland.

The Oct. 27, 2011, rescue demonstrates the danger and selfless dedication of SAR crews every day in Canada with the death of Canadian Forces SAR Tech (search and rescue technician) Sgt Janick Gilbert, who had earlier jumped into the water from an accompanying CC-130 Hercules to assist the two walrus hunters.

The rescue of the two hunters, who had become stranded on an ice flow in the Arctic sea near Igloolik, Nunavut, required the team to cover 2,780 kilometres in the shortest time and with the fewest stops possible. Noble and Vey plotted a mission which used no crew replacement and three very short fuel stops, and, after about 12 hours of flying with night setting in, Rescue 915 was told the conditions of the hunters had worsened. In addition, there were three SAR Techs from 424 Squadron at Canadian Forces Base Trenton, Ont., who had parachuted into the water from a CC-130 Hercules and two personal locator beacons had been activated indicating there was more trouble in the water.

When they arrived at the scene, the crew of Rescue 915 was confronted by 90 km/h wind gusts, and 10-metre-high violent waves tossing masses of ice into the air; with life rafts, people and strobe lights in multiple locations. With Hiscock manning the hoist, Villeneuve and Bretschneider were lowered to the icy water where they fought waves and freezing sea spary, and dodged ice. They swam to the first life raft, dragging the hoist hook, line, and rescue “horse” collar. Upon arrival at the life raft, they were constantly submerged as they worked together to get the two hunters and one of the 424 Sqn SAR Techs into the AW101. Villeneuve started to tend to the hunters and SAR Tech who were suffering from exposure and exhaustion. The crew repositioned over a second life raft and Hiscock again lowered Bretschneider into the sea to recover a second 424 Sqn SAR Tech.

After a short search, the unresponsive body of Gilbert was spotted floating in the ice and waves and Bretschneider was again lowered into the icy water. At some point while trying to attach Gilbert to the rescue line, Bretschneider was struck on the head by the heavy hoist hook. Dazed, he still managed to hook himself and Gilbert’s body to the hoist and they were brought up. By the time they got to the aircraft door, Bretschneider had deteriorated and Hiscock had to struggle with both men on the line until Villeneuve, and MCpls Marco Journeyman and Maxime Lahaye-Lemay - the two rescued 424 Squadron SAR Techs who had recovered sufficiently - were able to help get them inside.

Running low on fuel, with everyone accounted for, Rescue 915 was able to finally head to Igloolik and further medical support, more than 18 hours after their day had started.

Both SAR teams were previously announced as winners of the Guild of Air Pilots and Air Navigators (GAPAN) Guild Award for Gallantry, which will be presented at the medieval Guild Hall in London, England, Oct. 23.

“Despite the tragic loss of life, this rescue is being recognized because of the extreme circumstances of distance, location, weather conditions and the rescue of two hunters, two SAR Techs from another squadron and the recovery of their companion,” said Jeremy Tracy, AgustaWestland’s head of region for Canada. “While there were a number of very worthy contenders, this particular rescue stood out for the complexity and danger and was therefore the unanimous choice of the adjudicators.”

Major Clinton Mowbray, Commanding Officer of 103 SAR Sqn, said: “We are all extremely proud of the crew of Rescue 915,” said. “They persevered through incredibly difficult conditions that lesser men would have turned back from. Sadly they could not save one of our SAR brothers but their perseverance despite immense personal risk ensured four others lived.”

The Cormorant Trophy for Helicopter Rescue recognizes the Canadian civilian, government or military crew that has performed the most demanding helicopter rescue of the year. A presentation ceremony is set to take place later at 103 Squadron. 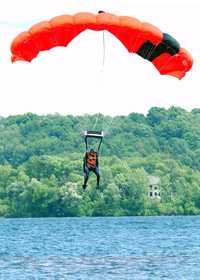