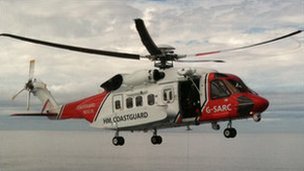 The long range mission was launched after the Spanish coastguard asked for help to bring the crewman, who fell and suffered head injuries, to safety.

His boat, the UK registered Mar Blanco, headed towards Stornoway to bring it into the helicopter's range.

Conditions were difficult with storm force winds and waves of up to 10m.

The injured man was winched on to the helicopter and was being taken to hospital in Stornoway.

A Spanish translator helped to relay instructions to the fishing vessel for the operation.

Initially safety cover for the helicopter was to be provided by the coastguard surveillance aircraft but this had to turn back due to icing problems.

The rescue helicopter from RAF Lossiemouth was then asked to provide cover.

Stornoway Coastguard watch manager Murdo Macaulay said: "In this weather and at this range it was vital that the helicopter was able to rendezvous with the vessel and evacuate the injured crewman with as little delay as possible.

"This operation has required close co-operation by many different partners in the search and rescue framework."