The military rescue technician who was lowered from a helicopter to save a crane operator stranded above a massive fire in Kingston, Ont., credits daily training for the success of an "extremely unusual rescue."

Sgt. Cory Cisyk, a search and rescue technician for 424 Transport and Rescue Squadron based at 8 Wing Trenton at CFB Trenton, recounted the rescue to CBC's Ian Hanomansing.

Cisyk, who is originally from Regina, was aboard the CH-146 Griffon rescue helicopter that arrived at the scene above Princess and Victoria streets before 4 p.m. Tuesday to reach the worker, who was trapped high in the air while fire crews worked to put out a blaze below.

Cisyk said that as they were flying to the location they didn't know what to expect, but the crew had a couple of different plans. 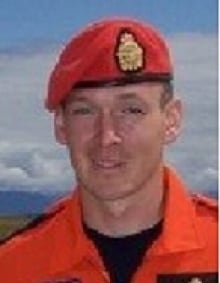 Cory Cisyk was the rescue technician who was lowered from a helicopter to save a crane operator stranded above the massive fire in Kingston, Ont.

Based on the information they received, they planned a "double-up" rescue in which Cisyk would be lowered from the chopper on a cable and then use a strap or "horse collar" to wrap around the crane operator and pull him up.

Cisyk said that when he first made contact with the crane operator, it was difficult to communicate with him because of the noise from the helicopter.

"I kept asking if he was OK. I kept telling him I was trying to get him out of there."

Cisyk said it took time to get the collar around the man because he was lying down at the end of the crane's boom, but that he got some help from the helicopter flight engineer.

"He could tell I was having a hard time getting the individual to stand up, so he was gently hoisting to aid me."

Once he got the crane operator in the chopper, Cisyk said, he had only a brief conversation with him to find out if he was hurt. The man was taken to hospital with minor injuries.

"For us, this was extremely unusual. But even discussing with the crew afterwards … we really figured that the training we do every day really came into it and played a big factor in ... the way things ran."

John Ashie, who was working at his family's car dealership down the street, said the entire episode was like something out of an action film.

"Especially when the helicopter guy was rescuing him from the crane, everyone was like, 'Oh my god! I can't believe this is happening, it's just so surreal,"' said Ashie.

David Elias, a civilian public affairs officer working for the Canadian military, said the crews are normally not involved in urban rescue.