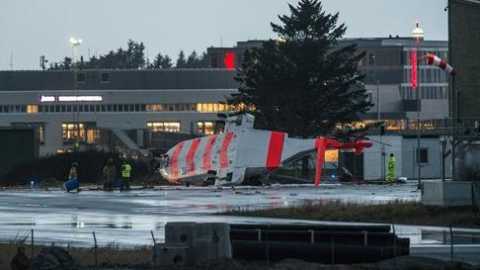 The helicopter, the first of 16, had been delivered by just one week: the accident occurred at rotor running during a ground test. Still unknown the extent of the damage, there are no injuries

The first unlucky exit for the AgustaWestland AW101 for the SAR service in Norway . The helicopter had been delivered by just a few days : in the afternoon of Friday, November 24, it was overturned for causes to be verified while engaged in a test on the ground .

The aircraft, the first of 16, was destined for Norway under a contract of a total value of 1.15 billion euros .

The AW101, belonging to the 330th Norwegian SAR squadron, stumbled into the inconvenience during a rolling phase, rotor running on moving blades, according to a spokeswoman for the Norwegian Defense Ministry .

The first photos from the base of Sola, taken by Jarle Aasland , show the AW101 lying on one side. No further damage to the top of the helicopter is visible, the main rotor blades obviously become damaged or missing, although the exact magnitude of damage to the main rotor is unclear.

At the time of the incident on the helicopter there was an unknown number of passengers , so no intervention was required of the medical staff.

The Ministry of Defense announced the opening of an investigation into the accident. The helicopter had been delivered from the Leonardo headquarters in Yeovil , UK: the builder was warned of the accident.

According to the original plans (the contract, signed in 2013, has an estimated value of over € 1 billion and includes maintenance and training ) Leonardo should have delivered the first two AW101s by 1 April 2017.