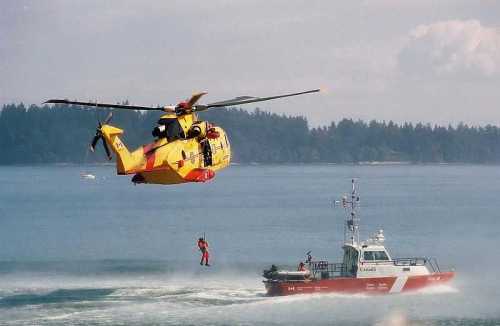 ST. JOHN'S, N.L. — One of five fishermen plucked from churning, windswept seas said he felt like they had become trapped in a scene straight out of "The Perfect Storm" as winds and waves lashed their fishing boat far off Newfoundland.

Frank Brown was with four other crew aboard the Northern Provider on Sunday when a vicious storm came on quickly about 150 nautical miles northeast of St. John's.

Brown said the setting was much like the 2000 George Clooney movie that chronicled the demise of the Andrea Gail fishing boat, which was lost near the Flemish Cap off Newfoundland with all its crew in a raging 1991 storm.

"It was like a scene from the movie 'The Perfect Storm,' but with a better ending,'' he said. Search and rescue personnel work at the Joint Rescue Coordination Centre in Halifax in 2013. The operation handles 2,700 search and rescue cases a year and covers 29,000 kilometres of coastline. (Photo: Andrew Vaughan/CP)

Brown and his crew mates, who had been at sea searching for seals since Monday, ran into trouble coming home Sunday morning when winds suddenly gusting to 60 knots pushed swells from three metres up to 10 metres.

Fearing they wouldn't make it, they sent out the distress call and waited for help. It finally came in the form of a helicopter dispatched by the Joint Rescue Co-ordination Centre.

"It was a sigh of relief to see the helicopter hovering over the boat,'' said Brown, who is from Summerford.

"It was like a scene from the movie 'The Perfect Storm,' but with a better ending."

Conditions were so rough they couldn't be taken off the boat, so the crew had to jump in the water and be rescued by a search and rescue tech who was lowered into the water from the helicopter.

A video taken from inside the aircraft and released by the centre shows a diver wearing a mask and flippers being lowered down into the choppy water as the fishermen jump off their boat, one by one, as chunks of ice drift nearby. (Watch the video above.) A Royal Canadian Airforce Cormorant helicopter takes off from the airport in Deer Lake, N.L., in 2015. (Photo: Andrew Vaughan/CP)

Brown was amazed they all walked away without a scratch.

"It was a pretty dangerous situation, but the helicopter crew were the best of the best,'' he told VOCM News.

The harrowing experience didn't seem to phase Brown, who said, "I'd go tomorrow, if I had a boat,'' when asked if he would venture back out on the water.

The Northern Provider was abandoned in the high seas, and coast guard vessels have been dispatched to see if it's still afloat.